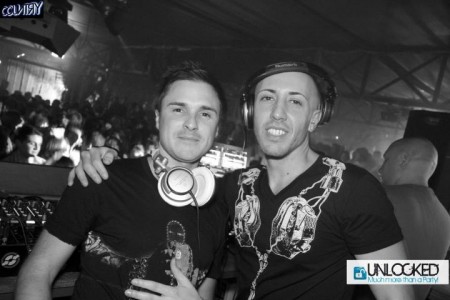 The young italian duo from Rome, known to everybody as PROMISE LAND, are into the music scene since 10 years now. Their beginning is remarked by a quite traditional approach with Keyboards, Music software and of course a dj equipment. They have well re-shaped their sound for years till 2009/2010 wherein the international audience discovers their Large remix for monsters djs Axwell, Angello, Ingrosso Laidback Luke for the single “Leave the world behind”; Afterword a smashin’ remix for Fedde Le Grand first album premier single as well as a few join-ventures have well displayed their name to the main radio, media and Dj stars, whom do often support their tracks.Lately they have released the production and remix for “Amazing”, a brand new single by Reder8… actually supported by planet god’s monsters alike David Guetta,Tiesto, Swedish House Mafia, Roger Sanchez, Bob Sinclar, Steve Angello, Axwell, Chuckie, Laidback Luke,Tocadisco, Dimitri Vegas, just to name by a few ones. This absolute #1 club winner give them an add hyoe and got em under the spot of majors and main teamworks alike Atlantic, Warner, Universal and world wide top indies!